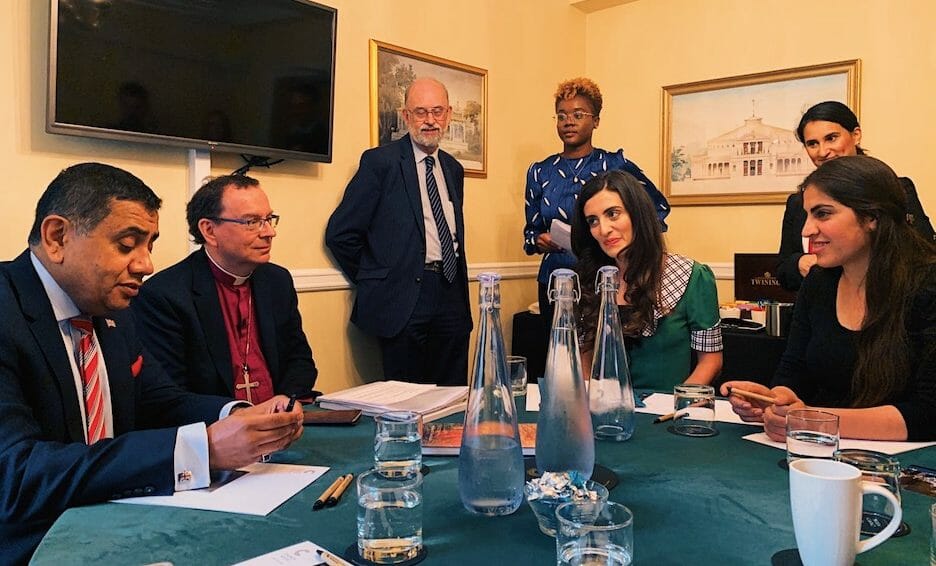 If I have learned anything in my time working with Roads of Success as a Creative Director and teacher for Yazidi refugee girls, it’s that there are few things more powerful than being able to share one’s story with the world. The simple request I hear time and time again from those suffering persecution in the Middle East is for the world to know what they have faced. They want the world to know their history, their pain, and to help them collectively seek out hope together. While this is by no means an easy ask, it is certainly a necessary one, and one that is beyond deserved.

At ROS, we have dedicated our lives towards giving a voice to the voiceless. We continually seek to empower others to find their voice and support them, or be the voice for those who are not able to share their story. There is no better duo to exemplify this dynamic with than our own Vice President, Jacqueline Isaac, and our Ambassador of Hope, Ekhlas Bajoo.

On July 15 2019, the Bishop of Truro invited both Jacqueline and Ekhlas to his Independent Review for the Foreign Secretary of FCO Support for Persecuted Christians. He asked them to speak on behalf of the targeted Christians, Yazidis, and other endangered minorities in the Middle East, specifically in Iraq.

The Bishop himself shared in this press release that “the freedom to think for oneself and to choose to believe what one chooses to believe, without fear of coercion, is the most fundamental human right, and is indeed the one on which so many others depend…” (Independent Review Media Release). We could not agree more and this is the reason Jackie and Ekhlas, along with our entire ROS team seeks out justice and empowerment the way we do.

Jacqueline began by sharing accounts of Yazidis and Christians persecuted by terrorists in the Middle East and the personal impact it has had on her life. Ekhlas then followed, speaking in Arabic with Jacqueline translating for her in English. She shared own testimony of physical and sexual abuse by the hands of ISIS simply because of her Yazidi faith. Her speech was incredibly powerful, bringing me to tears as I listened to it through my cell phone.

That line that stood out to me amidst it all. “Humanity goes before religion.” Chills run through my body every time I hear those words and think of Jacqueline’s face as she voices them for Ekhlas. Many times, Ekhlas has shared how humanity is what keeps her going. But the weight of her words resonated differently this time. She then took Jacqueline’s hand and raised it above both of their heads. Jacqueline continued translating for Ekhlas: “…and the evidence of that is how we’re standing hand in hand.” The significance of this act and the accompanying words cannot be overstated.

Previously, Ekhlas spoke of humanity in regards to how it motivated her. Now, she spoke of it in seeking to motivate others. This was a call to action. A call to action of not letting our differences divide us or our beliefs of faith be held against us. Ekhlas continued to press into this action statement:

“For over 4 years we have been standing and battling for those together, battling for those who have been persecuted and for justice. Because it’s my right to see the Daesh [ISIS] perpetrators accountable and prosecuted against me as a Yazidi, against Christains, and against other minorities. They took our childhood. There’s nothing they did not do to us. But we will not surrender as long as we have your humanity and have you with us today. And today I have hope in your humanity and justice. I want to see them accountable. And I have faith in your humanity. I will not surrender and I will continue to smile with your humanity in me and with justice.”

None of these words were said lightly. Nor were they received lightly either. There is power in words, power in what we say and how we say it. We never take for granted the opportunities we have to voice our stories and the stories of those around us. Though Ekhlas grew up in the Yazidi faith, she also spoke on behalf of her Christian brothers and sisters in Iraq facing persecution. Because raising our voice is never only meant in speaking up on our behalf, but on behalf of those like us around the world.

Jacqueline also read a statement from a Christian friend also taken into captivity in the Middle East. This friend was persecuted side by side with Yazidis, empathizing with them, while also mentioning the differences in how the world received them: “When the world raised the voices of my Yazidi friends, the world gave them a future but we as Christians, the ones that escaped, are silenced. We escaped captivity to find freedom but we find ourselves in a new prison. We are alone because the world is blind to our stories. Please bring our stories to light.”

This request has echoed in my mind and heart since I heard it. This is my heart, just as it is the heart of our organization as a whole: to bring a voice to the voiceless. Like Ekhlas shared, together we have been fighting for justice for more than 4 years. We have been building relationships with Christians, Yazidis, and politicians in the Middle East for over a decade.  In some ways, that seems like the blink of an eye and in other ways that feels like a lifetime. As much as we sometimes wish the work was over, we will never stop sharing the stories of the persecuted. We will never stop fighting for freedom and justice from oppression. We will never stop standing hand and hand as brothers and sisters, no matter what our differences may be. In the words of Ekhlas herself: